Are there any mundane practices that are associated with this deity? 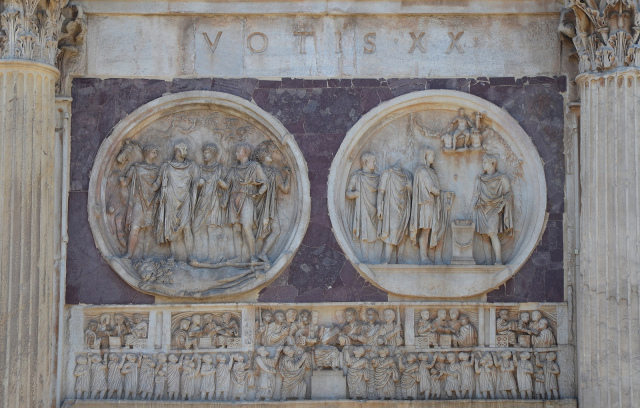 The Boar Hunt tondi from the Arch of Constantine

Unlike, for example, Hephaistos and Athena, Antinous was not associated with any particular profession or activity, nor with a stage of life like Hera with marriage, Artemis with women in childbirth. We do know that Hadrian enjoyed hunting and Antinous hunted with him. Three major hunting expeditions are attested by Hadrian’s sections on the Arch of Constantine and appear in the calendar of Antinous’ festivals: The Venatio Ursae or Bear Hunt on April 21st, the Venatio Apri or Boar Hunt on May 1st, and the Venatio Leonis or Lion Hunt on August 21st. Hadrian dedicated the skin of a bear he had hunted to Aphrodite and Eros in Thespia, with a prayer for a lover; soon after, the young Antinous came to court and captured Hadrian’s affections. The Boar Hunt is associated with the sensual and sexual pleasures of May Day, and the Lion Hunt, where Antinous nearly died in confrontation with the beast, is an occasion of examining one’s failures and then making a fresh start, inspired by the red lotus that bloomed from the lion’s blood.

Follow Naos Antinoou: A Temple of Antinous on WordPress.com